How long have you known each other?

How did you meet? Who, What, When, Where, Why? Common spill the beans!

Owen – I had attended the Leafs – Canadiens hockey game with my friend Matt, that night (I am a Habs fan). We decided to go out for a few more drinks after the game and ended up at Two Cats bar which is where I saw and approached her.

Ange – Living in London, I celebrated one of my best friends’ birthday in Toronto every January since she moved there almost 15 years ago. That night it was dinner at Bier Markt and drinks at Two Cats in King West. Later on in the evening, Owen walked up to me and told me that I was wearing the prettiest dress in the bar. We didn’t stop talking (or kissing) until some point the next morning when my friend and I dropped him off at his condo in the Entertainment District before heading back to London. We talked all week and he drove through a snow storm to my condo in downtown London the following Saturday for our first official date.

When did you know your fiancé was “the one”? Was there something specific that he/she did?

Owen – we were laying by the pool one Saturday afternoon at my condo in the Distillery District the following July, and I just knew. We’d always had great banter and fun together. It was so easy.

Ange – I knew far earlier than Owen did. It was a, April night out in Toronto that year.   Every weekend was amazing, no matter what we did (it was London – Toronto alternated). That particular night, we had gone to what became our favourite place to go, The Rexx. It’s a live Jazz club on Queen Street. Owen was hugging me so tightly while the singer who sounded exactly like Michael Buble sange “I’ve Got You Under My Skin”. I looked over and there were tears in his eyes, then running down his cheeks. That was it for me.

What is your favourite thing about your fiancé?

Owen – Ange is affectionate and I love that about her.

Ange – Owen is his own man. He doesn’t care what anyone thinks (accept me). He just knows who he is, which is an incredibly strong and noble person, and lives his life accordingly.

What do you love to do together?

Owen – We just enjoy being together – ALL the time.

Ange – In the beginning it was about all the best Toronto / London restaurants and hot spots. We would have SO much fun together. Now it’s about being with our little family (including our 17 month old son, Winston, who has become our entire world!!)

Tell us about the proposal.

Owen – Ange and I had decided to plan and have our family before getting married. Once the chaos of baby things slowed down, I took her to a local jeweller and had her pick out the ring she wanted. We selected our bands as well. Then it was a waiting game for the rings to come in and me to plan something for us without her knowing. I took her back to all of “our places” in the City, which we don’t get to anymore since we had a child and moved to the 905. I decided to propose at The Rexx because it’s where I associated us with falling in love and being in love.

Ange – Owen had already got me my dream ring because he wanted me to be a part of the process, so he could be confident that I would happily wear the ring for the rest of my life. He had his parents set up to babysit one night and he took me downtown (we live about 30 minutes from downtown Toronto because we moved to the 905 in April 2015). He took me back to all of our old spots: the Distillery District and of course .. The Rexx. That’s where he proposed and I was completely surprised.

Besides getting hitched, what was each of your favourite parts about the day?

Owen – Seeing a bunch of people that I don’t normally get a chance to see.

Ange – My MCs stand-up comedy throughout the night! They have been some of my closest friends since high school and it was just a blast. The entire “feel” of the day / night was just incredible …. And I know I wasn’t the only one who felt that way because I was getting texts / calls / emails for the week that followed gushing about what an incredible day / wedding it was!

Cake Bakery: Made by my sister, Lina Tsangaris

Owen – I am happy with our decision to have a video done of our wedding. It turned out really well.

Ange – It turned out as great as I’d hoped and we will have it for the rest of our lives!! I would not have gotten married without a great videographer in toe!! 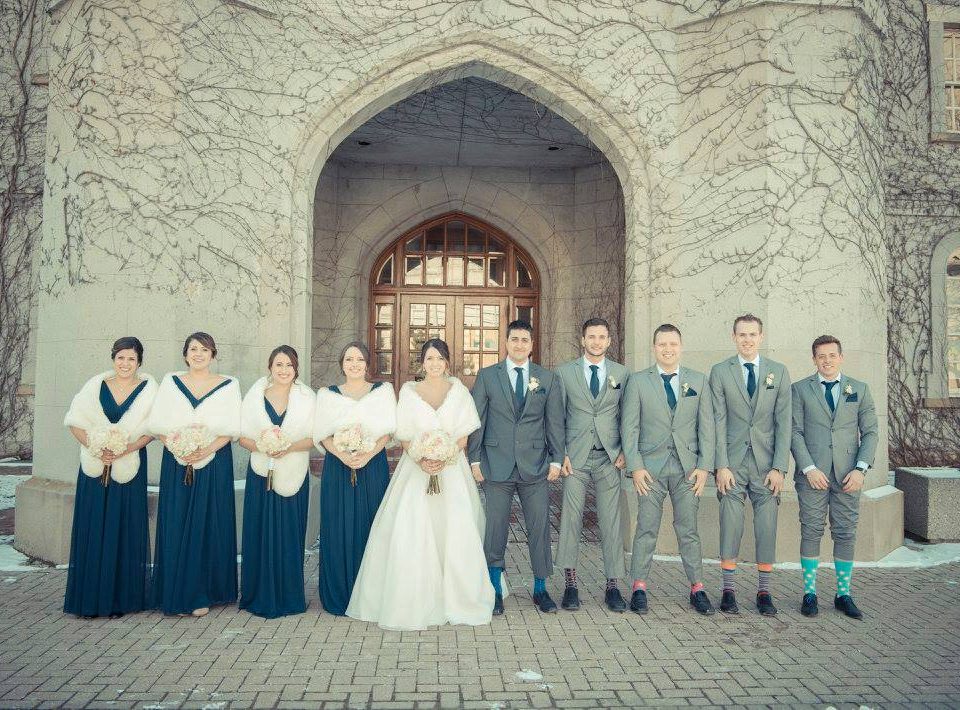